A lot of people ask me, how did I become an Indiana Pacers fan? I answer with one name, Reggie Miller. The whole story behind me becoming a fan and idolizing Reggie as a child is kind of humorous, because people expect some dramatic story. I don’t work like that, the truth is I really became a Pacers fan was because of those old EA Sports basketball games. I loved the 3 point shot, loved getting 3 points over 2 points versus my opponents, so I was looking for the best 3 point shooter, it so happened to be Reggie Miller. I still remember controlling the bald player and jacking up 3’s all day and making them. I honestly couldn’t believe that this guy was like this in real life. I remember watching highlights of a basketball game and seeing Reggie dropping 25 points in the 4th quarter on the Knicks. I was like this guy is no joke. Reggie even got me into playing basketball at a young age. As I got older and got to high school, I started following the Pacers more seriously; the rivalry with the Knicks was the main reason. Just seeing how Reggie performed on the big stage just had me in chills. It made me love basketball even more.

I remember even going to the basketball courts, shooting from the chest, realizing this is not how to shoot; Reggie puts the ball over his head and releases his jumper like that. So I mimicked his shot, I used to record whatever games I could on VHS, and replay all his shots in slow motion, just to see the formation in slow motion because I wanted to shoot like him so bad. The day I became a TRUE Pacers fan was when the Pacers took the Bulls to 7 games. I still to this day believed that if it weren’t for a few turnovers, the Pacers would have gotten that game. That game left my heart broken. I couldn’t stand the Chicago Bulls, I wanted them to lose. Usually when something leaves a bad taste in my mouth per se, I always stick with it.

When they made the finals in 2000, I couldn’t really follow them because hard times had hit and didn’t have cable, I was just checking highlights to see how they performed against the mighty Kobe and Shaq, and they just didn’t have anybody to stop Shaq, I knew they wouldn’t win the series, but I loved how they never backed down.

The JO, Artest, SJax era of the Pacers had me excited, because that team was stacked, and their record showed when they went 61-21. I think it was funny because even during that time, nobody was talking about the Pacers. When all hell broke loose in Detroit, as a Pacers fan I was upset because not only did they lose to the Pistons last season, they just lost all composure. When I saw how unfair the Pacers were treated with the suspensions, I realized how much I loved this team, because during the hard times I stuck by them, while most fans in Indianapolis gave up on going to the games and fans disappeared, I stuck by them and watched the losing. I understand why they (the fans) gave up on them, but I’m not the type to just walk away like that. I had so much trust in the organization to turn it around, I just sat there and watched it all come together and now, we have a team that’s almost ready to contend again in the East.

A lot of people jump ship when it hits the fan, but sometimes sticking with a team through the good and the bad can teach you a lot about yourself. I will forever be an Indiana Pacers fan, not only because of Reggie, because the people who are running the team really care about what they put out there, Larry Bird has made the die-hard fans proud and gave us hope for the future, not many organizations do that. I can’t wait to see how this team looks in 2050!! Go Pacers!!

Also I would like to congratulate Reggie Miller on being inducted into the Hall of Fame, it’s not every day you see someone you idolize growing up, end up enshrined with the rest of the basketball greats. I’m glad I stayed loyal and followed this man throughout his career. His body of work defines him, not by how many championships he got, I wish he could have celebrated, but I know once the Pacers get over that hump and get that championship trophy, Reggie will definitely get a ring, 1 word. Respect

Here’s some pics of me reppin’ Indy 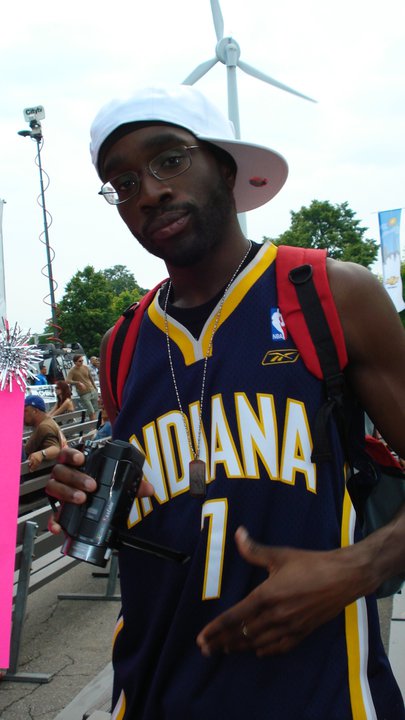 Reggie’s last game at the Air Canada Centre, I was there!

In case you missed it, here’s his HOF speech along with some career highlights