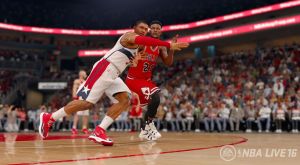 Sean O’Brien and the Hoop Gawd were doing a twitter Q&A, a lot of new information about the game were revealed, check it out.

Thanks to Andrew for the recap, discuss in the NBA-Live forums here: http://bit.ly/1QzIXS2 (@NLSC on Twitter)

More information coming in the following days, why? cause E3, the game is playable on the floor