Question, would the NBA Live series benefit from having player movement sliders? My answer would be YES. While I believe NBA Live 18 has the best game play of the series (maybe up for debate for some) I believe this game has truly blossomed from what was NBA Live 14 to now. My only issue with the new generation of NBA Live games have been the lack of customization freedom. There were no sliders in NBA Live 14 or 15 but they made their debut in NBA Live 16. Adding sliders to Live 16 to me saved the game, because as an offline gamer, I’m always looking for new ways to mess with the game and experiment. With a few patches here and there with my current slider set has made the game more fun enjoyable offline. Adding more customization for online modes would be welcomed as well. Gotta keep beating that drum.

With the majority of the sliders from NBA Live 18 I assume are coming back for NBA Live 19, I think the team should expand one them allowing for more creative freedom for its users. As most of you know the NHL series has been one of my favorite series from EA, has tabs of sliders to customize game play. “Oh, here he go with that NHL/NBA stuff again” naaaaaaah, here me out, one last time dawg lol. While I believe the sliders in Live 18 does its job, they are still flawed. A part of me believes that they are tied to player tendencies as well because I had to turn up post scoring and medium jumpers to 80, and guess what, the CPU has taken more mid-range jump shots since then. Is it because of the sliders 100%? I don’t know, but I can only tweak what they give so even as an assumption, its factual in my eyes lol.

Now, what makes NHL’s game play much more fluid than NBA Live is the ability to tune things like player agility with and without the puck, look at it in a sense of with and without the basketball, 2K has similar sliders as well, but to me, they don’t work as well as NHL’s. Check out the picture below. 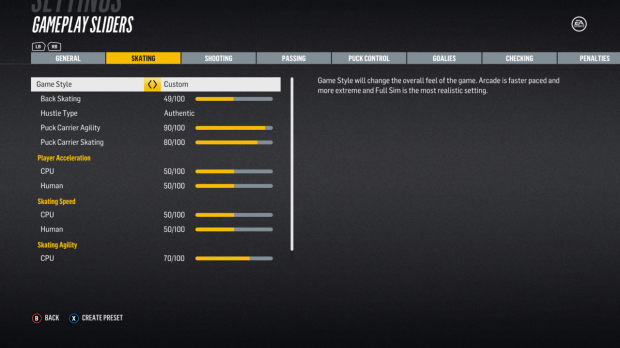 Let’s imagine this was a basketball game:

How much a player’s hustle increases his top speed. Authentic or just speed bursts.

How much agility a player loses when he has the ball – This could separate the boys from the men. Adding finishers with this feature (control wise) IMO will separate a regular player from a super athletic player.

How much speed a player loses when he has the ball

Player acceleration with and without the ball. If a player’s has superior handles, he could go full speed without losing control with the ball. Users should be able to control this.

Agility Without the Ball:

How easy a player can turn with the ball.

Here are a look at 2K’s Player movement sliders. They also have lateral quickness but it’s in another section.

Same concept as NHL, but basketball related. It’s very possible to have these in NBA Live, whether they want to include is totally up to them.

A lot of these sliders would work as stand alone ratings, but it would also be needed on a global scale as well in case you want to tune the overall impact.

Agility sliders are important, it’s what we should be talking about more. If there’s one thing that NBA Live does better than 2K is having the ability to use space off the dribble. FIFA is king of using the 1v1 space, mainly because the ball is not tied to the player. NBA Live does it well right now, but there are times that warping really ruins the game play, especially on ball screens. Foot speed and the ability to twist and turn for athletic players is very important, foot planting is very important moving forward, all of these things can be improved. If a player doesn’t have good footwork he shouldn’t be able to recover once he gets beat. Every single step in the game should matter whether it be on offense or defense (limit the warping/slingshot effect). Example, If you’re guarding Kevin Love in the corner, sagging off him too much should be thought about more because the recovery time should impact that decision. How greedy will you be on defense? If done properly, the trash players one the court won’t last in Live Run, Live Events etc. You have to make users think about spacing.

In order to have the CPU opponent react smarter in game situations, he has to understand that he cannot cheat. FIFA has done it with their game play and it has improved drastically in that aspect of the game. Having that done well, you would be able to play on superstar level and have to out execute the CPU. Same thing applies to USER vs USER.

Also note that the CPU in NBA Live 18 offline has issues using moves (back down, cross over dribbles etc) compared to online, CPU in the post is really terrible. They should be able to initiate moves just as well as the USER can.

Another slider we could use is a fatigue slider, for both user and CPU, because there are times in the game that the CPU won’t bother to call a time out. Substitution logic is also too scripted. If you’re playing a game vs the CPU, it should be a chess match. There are times where a you have the advantage on offense but the game won’t let you exploit that match up due to poor spacing logic. NBA Live 14’s spacing is still unmatched. I also want to talk about substitution logic in the future.

If NBA Live 18 had this space to work with, game play would be much better 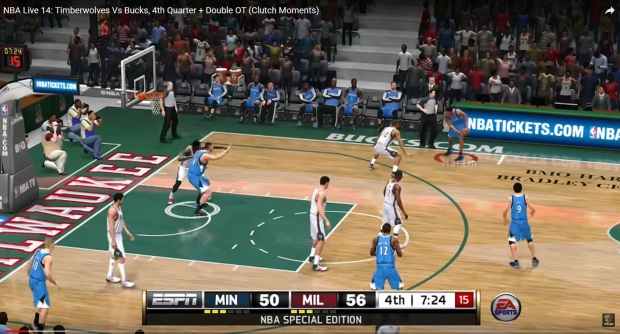 *If you don’t know what to look for, look at the amount of space available in the corners. The CPU cheats because they automatically know how much space they need to recover. It shouldn’t be that way. 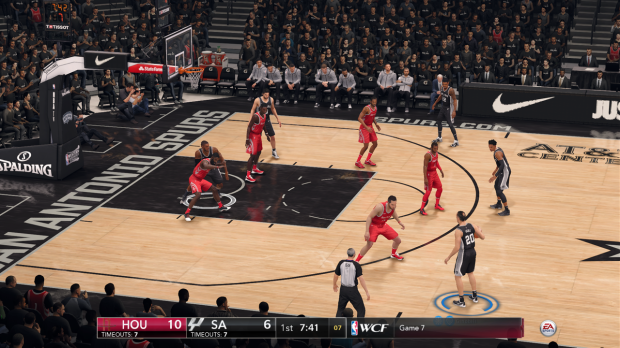 *Weight is an issue in NBA Live 18, I understand why, but having MORE collision animations and making them work in regards to momentum can really be make a difference.

I increased strength/weight ratings in NBA Live 18 (before the last patch where they nerfed it) and it made the game play much more realistic. If there were more ratings available I probably could have changed the whole player scaling through the ratings.  One of the comments from the video:

“I have to say that applying Strength at 99 did make the players’ motion in the game less chaotic, but in some instances made their movements looked heavy and unnaturally slow, but overall it neutralized the pacing of the game just enough that you can tell.”

If EA wants to create a well balanced online mode, creating more available (visible) ratings will enable players to play more to their strengths and not try to do what they can’t do. These are the ratings that were available in NBA Live 09. The ones I would like to see return in the game are in BOLD.

*scoring with contact definitely needs to be in the game

*Shooters mentality would be great for “pure shooters.” Guys like Kyle Korver are driving making buckets in NBA Live 18 and he doesn’t do that.

*since boxing out is a problem overall, why not have a rating for it?

*Go-to-guy could work because there are time where you would see LeBron moving off screens to get open, but in reality, he has the ball in his hands making the plays. Things like that can make a difference.

If you expand the rating system with more tendencies, you can keep players from playing outside of their comfort zone. When you make a player uncomfortable, that’s when you can force turnovers and mistakes for the opposition and create opportunities for team. NBA Live has the ability to be a smart basketball game, as well as a fun experience, just need the tools.

What do you guys think? Hit me up on twitter (ThaLiveKing) and let’s talk about it