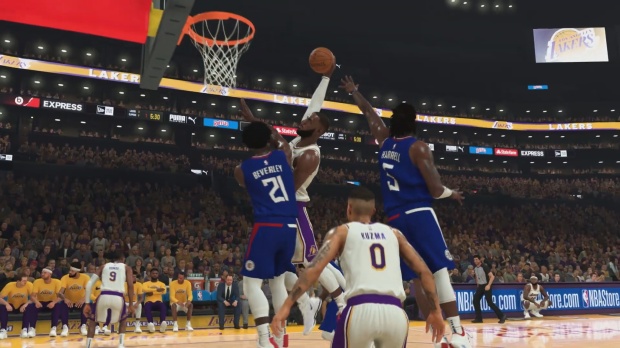 While I understand that 2K is trying to create a more *balanced game, I can see why their community is frustrated. Their build system is geared towards Pro-Am players rather than park players and has caused an uproar. I personally don’t think it’s a bad idea, because I play a lot of NHL online and there’s no over powered players (just moves), but the problem with the game for me is the game speed. 2K is definitely scared to up the tempo for some reason and it’s mind boggling. Basketball is supposed to be a fast paced game and all about timing, but players still feel sluggish and slow no matter the position. This causes issues for me because a lot of things they talked about in their game play blog gets hampered by this, in my opinion.

But anyways, once the full game drops I will be digging deep and trying to create a better offline experience for my content, so I might not even touch the online stuff, it’s just hard to get into. 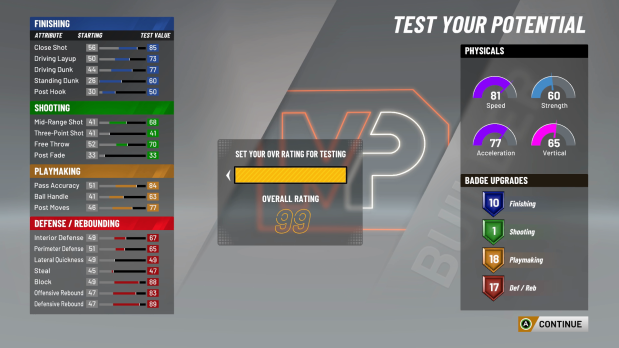 Pretty sure in the full game you can go back and change your overall and test it, but the main issue I have is that there’s no customization for physical attributes. Even if they add more pie charts, you are still limited in how your build moves. In the build above (play making glass cleaner), if I want more player acceleration, something else gets really compromised. Why is acceleration lower than speed? It should be the other way around.

2K wants builds to be more of a specialist, so as a play making glass cleaner, my defense attributes in the paint are more highlighted based on the previous skill pie chart I selected. If you look closely, ball handling is capped at 63, which is useless for a play maker, so if I am an overall 99, why can’t those be pushed up? I don’t have any attributes here in the 90’s but I am an overall 99, which doesn’t make sense. The only explanation I have is that the badges are the boosts. 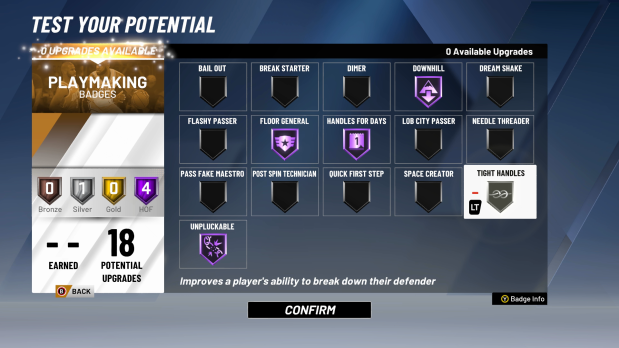 Since my guy is a play maker, the potential upgrade number is at 18. I have 16 total badges that’s eligible for upgrade. How I’m looking at this is that, however you want to play out there, you make sure you put it at either GOLD or HOF. You shouldn’t spread them out because I don’t think it would make much of a difference while you are out there. You still should be able to see what attributes the badges affect. 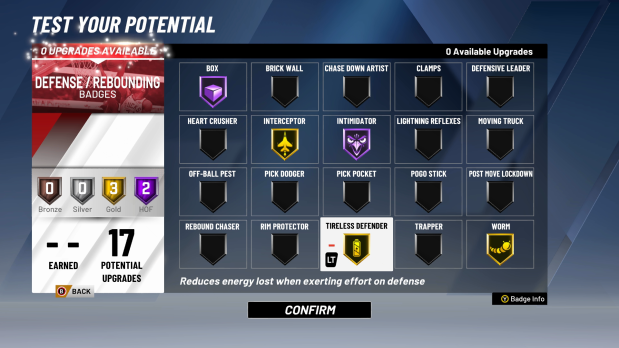 Whatever is low in your attributes, defensive/rebounding in this case, you either want to max those out at HOF or GOLD them.  Look at something like perimeter defense (65 in the picture above) check to see what badges can give you a slight boost. Your rating isn’t going to change with what you’re good at, so if you’re satisfied with an 89 in defensive rebounding, you can put a gold badge on something like Lightning reflexes or pick pocket. I say this because, even though 2K doesn’t show you what rating it boost, you at least have the badge to make up for a lower rated attribute. In this case I put Interceptor, Worm and Tireless Defender at Gold, and Box out and Intimidator at HOF. I don’t believe silver or bronze is the wave, if you want to be good at something, be great at it.

Speed & acceleration are set at 81 and 77 (picture above), but if I want to boost those, I would put quick first step at HOF. Same thing with ball handling (63) you would Gold out Tight Handles, Space Creator or Needle Threader. In my case, I mainly focused on Downhill, Handles for Days, Floor General, Unpluckable and Tight Handles. All of this depends on what you want to make and how you want them to be out there. I just wish there was more control over physical attributes.

Badges enhance your existing abilities. So for example if you add Unpluckable but have low Ball Handle it won’t save you from getting ripped. It will reduce the frequency a bit, but won’t make you the same as a good ball handler with the same badge.

The way I’m looking at take over is basically how I look at fighting games, the more you’re able to do out there, the faster that meter goes up which would allow you to be more of a threat once it activates. Play maker on this  build is the Take Over, so once activated, just give me the ball and I’ll make sure to ball out and get my teammates involved.

What do you guys think? hit me up on twitter @ThaLiveKing, also if I missed anything let me know